The Best Bape Hoodies of All Time & How to Wear Them 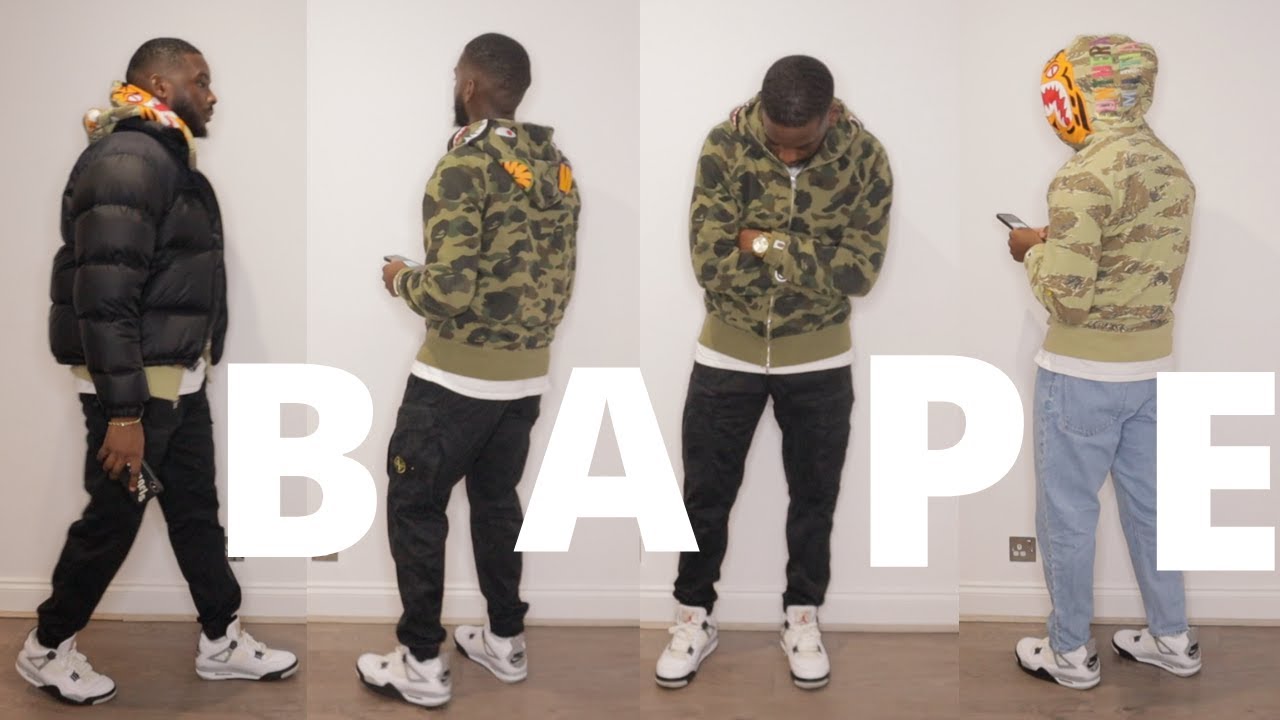 The Best Bape Hoodies of All Time & How to Wear Them

A Bathing Ape (BAPE) is one of the oldest street fashion brands and one of its most coveted. The fact that celebrities from left to right are wearing Best BAPE Hoodies regularly creates so much hype around the brand. Among the brand’s most popular items are its camouflage shark hoodies.

If you have not heard of BAPE, where have you been for the past 20 years? BAPE is one of streetwear’s most prominent and arguably most reputable names, founded in Japan by the legendary Nigo. Kanye West, Jay-Z, Pharrell Williams, and Biggie Smalls, to name just a few icons who have worn the BAPE camo hoodies over the years, have all been seen rocking the highly recognizable brand over the years.

There is no doubt that the BAPE hoodie is the most famous of all these designs. Shark’s teeth and a head in the shape of a shark decorate the hood, reminiscent of jet fighters from WWII, giving it a killer look. The BAPE panda hood has a similar design to the original shark hood, and there’s also the tiger hood, which is also based on the original shark hood design.

BAPE was founded in 1993 by Japanese fashion designer and DJ Nigo, who was also the head of BAPE. The brand originated from Ura-Harajuku and specialized in men’s, women’s, and kids’ streetwear. Currently, BAPE has 19 stores operating in Japan alone. The company also has Hong Kong, New York, Dubai, and Singapore stores. Those of you who are streetwear OGs must remember the BAPE London store on Upper James Street, a must-visit, along with the adjacent Hideout store. Sadly, both stores are no longer in existence due to a variety of reasons.

BAPE is now regarded as one of the world’s most famous and successful brands. It has a number of spin-off brands that it operates under its names, such as Mr. Bathing Ape, AAPE, and Baby Milo. Before founding BAPE, founder Nigo was already heavily connected in the street world.

He was an editor and stylist for Popeye Magazine for a number of years and then went on to open a store named “Nowhere” in collaboration with designer Jun Takahashi, who is renowned for his Undercover series.

There have been countless BAPE collections released since then, and BAPE has collaborated with many more big names than you can ever imagine. Rappers and other celebrities worldwide are already wearing it as part of their daily wardrobes, and it’s become almost as important as a basic outfit. On the 1st of February 2011, after years of solid success, Nigo sold 90% of his BAPE empire to the Hong Kong conglomerate IT Fashion group.

People have claimed that Nigo’s departure from BAPE was the cause of the brand’s downfall, and things changed for the worst, yet the brand continues to release new collections and high-quality pieces regularly. Also, Nino is still very relevant in the streetwear world, as he is the co-owner and head designer of Pharrell’s Billionaire Boys Club brand.

It is the BAPE item that most people, whether interested in streetwear or not, will be able to identify. Shark hoodies are classic designs copied by many, and you cannot call yourself a true streetwear enthusiast if you haven’t owned one before. The shark hoodie is one of BAPE’s most popular designs, often incorporating one of BAPE’s classic camouflage patterns and available in bright colors such as purple, orange or blue; the shark hoodie has seen unparalleled success. The shark hoodies are always a staple in BAPE’s new collections, and they always seem to sell out within days of release.

BAPE Tiger Hoodie is very similar to the shark hood and is very much inspired by its design. You can swap the shark image for a tiger image, and you will have a tiger hood. The brand is just as successful as its older brother and has been seen prominently on Kanye back in the early 2000s when it was released.

The Panda hoodie is another style similar to both the hoodies mentioned above. It’s not easy to live up to being the latest of the BAPE animal head hoodies. But it’s managed just fine and has become just as much a best seller as any of its siblings BAPE is still producing Panda hoodies today, and they are worn by influencers worldwide.

In 2015, BAPE teamed up with sportswear giant Puma to create the Puma BAPE hoodie, perhaps one of their most acclaimed collaborations. The show caught the interest of the hype beasts, which featured a lot of branding and bold statement pieces. The show was a huge success and sold out worldwide as part of the collection of jackets, t-shirts, and a shark hood. There is no doubt that the shark hood has been the most successful and currently sells at twice the original retail price.

How to Wear a Zip Up Hoodie

One of the unique features of most BAPE hoodies is the full-length zip. As the hoodies are literally from waist to head, the idea is that the hoodies can be unzipped entirely to reveal the print on the hood. My personal opinion is that it is a questionable look, but it has been a great success so far. Hoodies that have zips are relatively simple to style. They can be worn zipped up or undone with a t-shirt underneath or used as a layering piece underneath a coat during the cold weather. This would look great with a nice pair of jeans and some trainers, and you’ll have a great look before you know it.

How to Wear a Hoodie Under a Jacket

One of the unique features that most BAPE hoodies have is a hood with a full-length zipper. Because the hoodies are literally from waist to head, the idea is that the hoodies can be unzipped entirely to reveal the print on the hood. Although I find it a bit questionable on a subjective basis, I have to admit that it has been a great success so far.

Generally, hoodies with zips are more accessible to style than those without. When the weather gets cold, they can be worn zipped up or undone with a t-shirt underneath (in colder weather) or worn as a layering piece underneath a coat. This will look great paired with a nice pair of jeans and some trainers, and you will be on your way to a great look before you know it.

What to Wear with a Hoodie?

It is recommended to wear hoodies with casual outfits. A hoodie would look best paired with good quality denim or tracksuit bottoms, along with a couple of on-trend runners to finish off the look. You may also want to consider carrying an essentials bag over your shoulder and a baseball cap or beanie.