From dystopian books to conquering space: the Jeff Bezos story 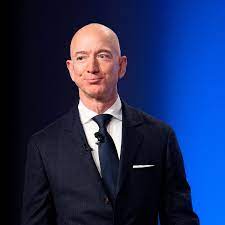 From dystopian books to conquering space: the Jeff Bezos story

“Work hard, have fun and make history.” This is the motto of Jeffrey Preston Bezos -better known as Jeff Bezos-, the founder of Amazon. At 58, he has a fortune that, according to the World Bank, exceeds the Gross Domestic Product (GDP) of Slovakia and Monaco. And according to Alexa, her favorite food is Thai and her favorite song is “Don’t stop believing” by the band Journey -don’t stop believing, in Spanish-.

It’s no coincidence that this is his favorite music, as through numerous lectures and tweets, Bezos shares motivational messages about failure, passions, and success. And you must know a lot about it, since since 2017 it has not stopped positioning itself in the top five of the richest people in the world.

We tell you a little more about this great personality from the world of technology, e-commerce and business.

1964 was a particular year. The Beatles were taking America by storm. Race riots were taking over the big cities – even the Civil Rights Act was signed in that year. Humans were making leaps and bounds to reach space, and in January 1964, in Albuquerque, New Mexico, Jeff Bezos was born.

His mother was 16 years old when she gave birth in her own home. Of his biological father, of Danish descent, nothing is known. Actually, the last name “Bezos” comes from his stepfather Miguel, a Cuban-born immigrant, who adopted it as his mother’s second marriage.

Bezos stood out for always being a good student. He started his first business at the age of 12, when he was in high school. It was called “The Dream Institute” and was intended to be an educational summer camp for fourth, fifth and sixth graders.

In 1993, he married the writer and philanthropist MacKenzie Scott, with whom he had four children: three of his own and an adopted daughter, originally from China. After 25 years, they ended their marriage in 2019.

What did Jeff Bezos study?

Unlike many tech moguls like Steve Jobs, or Mark Zuckerberg, Bezos did finish college. In 1982 he entered Princeton, where he studied Computer Science and Electrical Engineering.

During his career, the young man did numerous jobs related to computing and programming, which would help him found, in 1994, the first online bookstore called Cadabra.com. However, in his graduation speech, Bezos talked about his big dream: to travel to space.

The birth and rise of Amazon

Amazon did not start out as Amazon, but Cadabra, like “abracadabra”. But Bezos’s lawyer did not think it was a good idea, because it sounded like a “corpse.”

That is how he decided to rename his company and chose the Amazon name for two reasons: to suggest the scale it has -as the largest bookstore in the world- and because the listings of Internet pages, at that time, were mostly ordered. in alphabetical order.

He founded the company with the financial support of his parents and, as a good cliche, he started by keeping all the books in his garage. In 1995 Amazon sold the first one: “Fluid Concepts and Creative Analogies: Computer Models of the Fundamental Mechanisms of Thought” by Douglas Hofstadter.

By December 1996, after only one year in operation, it already had one million users and, by 1998, its revenues went from 15.7 million dollars to 610 million dollars. For this reason, in 1999 Time magazine named its founder as “Person of the Year”.

Given the success of the company, Bezos decided to bet on other areas, offering the sale of music, videos and items such as toys, electronics, clothing and food.

Bezos’s plans go further and, almost every year, the businessman sells part of his shares.

In 2016, he sold more than a million shares of his company, equivalent to 756.7 million dollars, in order to be able to invest them in his other business: the space company Blue Origins. Among its objectives are suborbital and orbital flights, both for official United States missions and for private flights.

At present, he only owns 7% of Amazon.